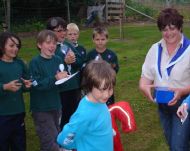 We have so far raised nearly £800 in sponsorship from the event. Thanks to very generous donations of £100 in vouchers from Scotmid to cover the catering costs, and ice-cream from the ‘What’s for tea tonight?’ farm shop, every penny raised is going straight into the hall refurbishment fund.

Particular thanks go to Bruce Cowie and Tracy Walker for a fantastic job on the catering, and to Marie and Nicole Thomson for lending a hand. We are also grateful to the many parent helpers and leaders who supervised the boys on the night, and to the doctors / NHS Grampian for giving us the use of their car park. Cub Rori Watt deserves a special mention for his tremendous efforts on the sponsorship front, as do Fraser Cassels (Beavers) and Jamie Wilson (Scouts).

Karen has been with the group for over 14 years, and District Commissioner Arthur Pearson was on hand to present her with a special badge to mark her long service. After she was handed a cheque for £125 for the Scottish Huntington's Association, a memory board made by the Beavers and an engraved goblet, she recalled the many other fun days, parties, sausage sizzles and trips. She also said it is doubtful she would have chosen to move to the job she loves - working with children with special needs - had it not been for the experience and enjoyment that came from running Beavers.